The Biggest Lesson I Learned In 2011 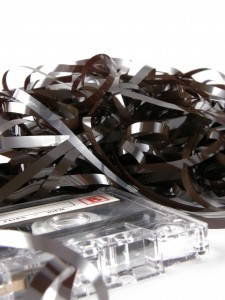 In episode 14 of the STG podcast (available to STG All-Access members), I talked about the process I used to review the previous year and set goals for the new year. One part of that was reviewing the top 5 things I learned in the last year. I thought I’d take a minute and share the #1 item on that list with you, because it made such a HUGE positive impact on my business and in my life.

The biggest thing I learned in 2011 was how to identify and deal with the negative “tapes” that keep playing back in my head…those “voices” that try to keep me afraid and stop me from living the life I dream about.

I know…I know…you’re probably thinking “Wow, Donnie’s hearing voices again!” The truth is that we all have this problem to one degree or another…psychologists call it “negative self-talk”. Alanis Morissette even wrote a song about it. It’s almost like there’s some kind of ENEMY sitting on your shoulder (or even living inside your own head), whispering self-defeating things into your ear, trying to undermine the bold actions you want to take to be more successful. I’m sure things like this sound familiar to you:

These stupid, negative voices are just like “tapes” looping over and over in our heads. They got recorded way back when we were kids, and each one is a customized message designed to keep each of us from reaching our full potential in life. I know for me, the same tapes are still playing in my head that I used to hear on the playground when I got picked on as a kid…over 30 years later! I don’t know exactly WHERE they come from or WHY they exist in the first place, but I learned this past year that DEALING WITH THEM means the difference between success and failure in my life.

The good news is that the things on those tapes ARE NOT REAL and ARE NOT TRUE! Some of you really need to read that again, because the real damage is done when we BELIEVE that stuff. If you can’t tell the difference between the truth and the negative tapes playing in your head, you tend to believe the tapes…and you never take the risks that can open the doors for success.

For example, what would you do in your teaching business if you KNEW YOU COULDN’T FAIL? Would you start teaching group lessons? Would you expand your teaching business into a new location? Maybe hire someone to work for you? Whatever that cool thing is that you dream about doing, but have never had the guts to attempt…there’s probably a negative tape playing in your head RIGHT NOW trying to talk you out of it.

I’m not a therapist or anything like that, but what worked for me was to start with just RECOGNIZING the negative voices for what they are. It’s not a valid fact about who I am or what I do…it’s not a feeling I need to act on…it’s not a helpful suggestion from my subconscious mind…it’s just a stupid TAPE. For me, realizing that simple fact is half the battle.

Once I realize this and understand that what I’m thinking and feeling isn’t REAL, I can choose not to believe it…not to act on it. I can dispute it with the TRUTH. And then, I can TAKE ACTION in spite of it! In the words of the late, great John Wayne, I still feel the fear, but I recognize it for what it is and choose to saddle up anyway.

Of course, I’m not suggesting that any of you do something stupid just because you’re afraid of it…make sure you keep your brain engaged in this process and seek out the wise counsel of people you trust. But in my own experience (and in the experience of MANY of the people I know and talk to), this is the single biggest thing that keeps us from being successful. We simply talk ourselves out of it…

The difference between successful and unsuccessful people

So, here’s my challenge for you: start making an attempt to IGNORE those negative tapes playing in your head and take some bold ACTION that can propel you to a whole new level of success in your teaching business in 2012. Yes, you will hear voices…yes, you will feel some fear…you’ll probably even call yourself “crazy”…just recognize those thoughts and emotions for what they are and let them go. You deserve to be successful, and the only thing holding you back is YOU!

A guidebook for the journey

I’ve been working on my thinking for a long time, but the process really sped up this past year when I started reading a book called “The 6 Pillars of Self-Esteem“. If you’re interested in working on this stuff, I would highly recommend picking up a copy for yourself. Special thanks to Jay and Sterling over at Internet Business Mastery for turning me on to this amazing book. And EXTRA special thanks to Kat Lessin, my Lifestyle Design Coach, for the guidance and inspiration to help me walk it out.

So for me, at least, the biggest lesson of 2011 was the realization that I’ve spent most of my life living in an imaginary prison made up of my own fears, and that those negative “tapes” are the prison guards, trying desperately to keep me there. If I stop listening to them, I can walk right out and be free.

What about you? If you’re ready to make some changes, then here’s your first assignment: leave a comment below and tell me a little bit about the negative tapes playing in YOUR head!

The Biggest Lesson I Learned In 2011 was last modified: November 24th, 2012 by Donnie Schexnayder

Posted on January 12, 2012 by Donnie Schexnayder in Being A Business Owner