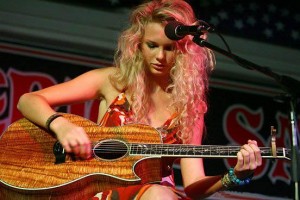 You may not be a big fan of Taylor Swift, but my daughter first introduced me to her music 3 or 4 years ago. She’s a really gifted songwriter, and I have to confess that this middle-aged “rocker dude” can occasionally be found with a Taylor Swift song or two playing on his iPod. She’s a great talent (the truckload of Grammy awards she’s won attests to that), but she’s never really been known for her guitar playing skills.

I recently ran across this short article about Taylor Swift teaching Zac Efron how to play guitar, and it got me thinking…here’s a quote from that article:

Her co-star Efron was certainly impressed with her at any rate, albeit being more thankful for her apparent skills at teaching guitar than for anything more suggestive. “She’s a great teacher,” he enthused at the premiere, explaining that she’d taught him a few things on the six-string. “In the past, everyone who’s tried to teach me guitar starts with music theory and stuff like that. I tend to just doze off after a little while. She went straight into songs. She taught me, like, four chords, and I’m already playing all the good campfire songs.”

Since Zac Efron is rich and famous, I’m pretty sure he studied with some experienced, high-level guitar teachers over the years…but they all FAILED when they tried to teach him guitar and Taylor Swift, of all people, SUCCEEDED. How is that possible?

I think Taylor Swift understands something that a lot of guitar teachers tend to forget: People want to play SONGS! They are less interested in music theory, sight reading, scales and chord inversions…and more interested in being able to pick up an acoustic guitar and play some songs for their friends. This is especially true for beginners.

Later on in their musical journey, your students will be more interested in the technical aspects…but in the early days of playing the guitar, you need to make sure you’re giving them what they REALLY WANT or they probably won’t stick around long enough to get to any of that other stuff.

I’d be willing to bet that 99% of the people who read this article can play guitar better than Taylor Swift, but IT REALLY DOESN’T MATTER. Like I mentioned before in this post about my son teaching his friends to play guitar, you don’t need to be an amazing guitarist to teach other people how to play…you just need to be one step ahead of them.

There’s always something unique that YOU can share with your guitar students…something special that differentiates you from everyone else. It may be your extensive knowledge of music theory, or it might just be the fact that you actually CARE. You will tend to attract students who are looking for that specific thing, so just be yourself and do what you do best whether you’ve been playing and teaching for 1 year or for 10 years. Always try to keep LEARNING and GROWING as a player and a teacher, but never lose sight of the things that allow you to genuinely CONNECT with your students. Remember: you DO have something to offer people RIGHT NOW…no matter what your level of development is.

All those other teachers Zac Efron worked with probably THOUGHT they were doing everything right. They started out trying to build a strong foundation with theory, the basics of music, and making sure he understood the fundamentals of how music works. Sounds great, right? WRONG! They bored him to death and drove him out of their teaching studios without even realizing it. They failed to understand his EXPECTATIONS…what he really wanted from the guitar, and from guitar lessons.

If you want to be successful as a guitar teacher, you really need to make an effort to understand WHY your students want to learn guitar in the first place…and do everything you can to fulfill those expectations. In THEIR MINDS, that’s what you’re being paid for…that’s their definition of “results”. Always remember that if your students don’t feel like they’re getting RESULTS, they will stop taking lessons with you and go elsewhere. This is a fundamental business principle…it would be unwise for you to ignore it.

So, those are just a few things that stood out to me from reading that article. It’s surprising and ironic how sometimes you can learn valuable lessons in the most unexpected places…in this case, from a 22-year old country artist. This might sound CRAZY, but it’s the honest truth: at the end of the day, as a guitar teacher, the ability to INSPIRE your students and teach them the skills they really WANT to learn can be more valuable than a music degree. Just ask Taylor Swift!

Do you think you’re a better guitar teacher than Taylor Swift? Let’s talk about it in the comments below!

Posted on March 7, 2012 by Donnie Schexnayder in Improving Your Teaching Skills