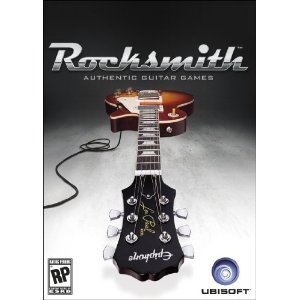 I’m sure you’ve heard about Rocksmith by now…it’s a new guitar-based video game similar to Guitar Hero and Rock Band, except for one important difference: you play it using a REAL GUITAR! Those other “guitar-based” games were all basically just “guitar karaoke”…they helped you develop rhythm and timing a little bit, but those toy guitars with the little colored buttons on them didn’t do very much else and now most of them are siting in a closet or in the trash.

But this game is different! Rocksmith actually teaches you how to PLAY the guitar…it doesn’t teach you EVERYTHING, but it’s a great “gateway drug” for getting beginner guitar students into your teaching studio. I’ll explain how in just a minute.

What does Rocksmith do?

In case you haven’t seen or played it yet, Rocksmith comes with a special USB-to-1/4″ cable that allows you to plug your guitar right into your game console (it also works for plugging your guitar into your Mac for Garageband, but that’s another story). It has built-in amp and guitar effect simulators which effectively turn your game console and TV into a guitar rig. The game also comes with 50 or 60 rock songs, ranging from The Rolling Stones to the Stone Temple Pilots to Nirvana…maybe not your FAVORITES, but the songs they include are all definitely FUN to play.

Rocksmith uses the familiar concept of a “note way” from previous guitar games…the notes of a song fly towards you and you have to play them at the right time. It recognizes the audio in the notes you play on the guitar, and it starts you off easy, gradually adding more notes and making it more and more difficult over time. You work through one song at a time in the “rehearsal room”, and then as you get better, you get to play “events” in a series of virtual “clubs” on a stage in front of an audience that responds based on how well you play. It starts you off with single note phrases, then builds up to chords, scales and various other techniques until it has you playing the entire song – solo and all – note for note.

Here’s a great introductory video by Guitar World magazine that explains Rocksmith better than I can in a few paragraphs:

My personal experiences with Rocksmith

Here’s a little bit about my experience with the game. I picked up a copy for my Xbox 360 a couple of weeks ago for around $80 USD…which might sound expensive, but when you factor in the included $30 conversion cable, it’s the same price as any other new game. Rocksmith starts you out with the basics…how to hold the pick, how to fret notes and how to tune your guitar. The built-in tuner works really well, and the game checks your tuning before each song. After that, you get to start playing “Satisfaction” by The Rolling Stones.

I’m an experienced player and pretty tech-savvy, so I was able to breeze through a lot of the songs…but it gradually kept increasing the difficulty on me until it actually became quite challenging. Once I mastered “Satisfaction”, the songs got more and more challenging after that. As of the time I’m writing this I’m at about 2,500,000 Rocksmith points and still going at it. I have to admit that this game is FUN…and it taught me some new songs and helped improve my timing and technique.

I let my 9-year-old son plug in his Strat Mini and give it shot, and he quickly got hooked. I usually have to force him to pick up his guitar to practice, but since he started playing Rocksmith I literally have to pry the guitar out of his hands! Since the game rewards you for your progress and it’s fun, he doesn’t want to put it down.

Finally, I talked my 59-year-old father-in-law into trying it out. He’s been playing guitar for almost 50 years and is one of the most accomplished musicians I know, but he’s not really into games or computers. He actually liked it, and he thought that Rocksmith would be a great way to learn new songs on the guitar. So, at least in my family, Rocksmith is a hit just as a motivator to pick up your guitar and play…not to mention the other benefits it brings to the table.

Here’s a quick run-down of what Rocksmith DOES and DOESN’T do well, from a guitar teacher’s perspective:

So it’s not PERFECT (yet), but it’s still a great way to get introduced to the electric guitar. It gets people going with the basics and leaves plenty of room for you as a teacher to help them with better technique, theory and everything else a well-rounded guitarist needs to know.

What Rocksmith means for guitar teachers

OK, so some of you are probably thinking “Great…this stupid video game is going to put me out of a job!” I actually think the opposite could be true…Rocksmith can be a GREAT way to attract more students if you EMBRACE it and approach it the right way. I’ve already seen forum posts by guitar teachers griping about how they would rather send a student away than mess with someone who is learning through a video game. One guy even went as far as saying that he didn’t want a bunch of “copycats and cheaters” for guitar students…but I’m guessing he probably doesn’t understand how the game really works.

My advice is to embrace this game! Buy a copy of it and try it out for yourself. I’m telling you: Rocksmith is opening up a HUGE new market of potential guitar students that just might be a great fit for you. Even if you HATE the other guitar-based games like Guitar Hero, and they caused you endless frustration because of what they did to some of the beginning students you’ve worked with…Rocksmith is different, and it’s your FRIEND. If you’re still skeptical after reading this, at least go down to your local Guitar Center and try it out for yourself.

How to use it to your advantage

I’m sure once you play Rocksmith, you’ll get a bunch of cool ideas about how you can incorporate it into your teaching business, but here are a few of mine to get you started:

1) Do a Rocksmith marketing campaign

Target beginners who play Rocksmith…emphasize how you can take what they’ve already learned and help them get to the next level (both in their guitar playing AND in the game). Lots of people will be getting Rocksmith as a Christmas gift, so this would be a perfect thing to launch at the beginning of the new year.

2) Create a guitar curriculum around Rocksmith

Take the approach and songs used in the game and create your own curriculum around it. Work through it with your students during the lessons, and then have them go back home and practice using the game. Instant motivation and rewards!

3) Put on some “Rocksmith Night” events for your students

Set up a couple of Xboxes and invite all of your students over to try the game out. Turn it into a promotional event for your teaching business and have them invite their friends to come, too! Give away prizes for the people who get the top scores. This will be fun for your students and it can bring in a bunch of new faces who might potentially become your students in the future.

Occasional contests like this are great for your business. They help keep people excited, and they keep you in the front of their minds. Contests work even better when you tie them to something you want your students to do, like bringing in referrals. Tell your students that whoever brings in the most new referrals within the next 4 weeks will win a free copy of Rocksmith.

There are probably 100 different ways Rocksmith can boost your teaching business, even if all you do is use it as a way to help some of your students get more excited about practicing the guitar! Just think outside the box and don’t allow yourself to feel threatened by something new and different. The most successful guitar teachers (and business people in general) are the ones who can adapt, adopt and adjust with the changing times. Taking advantage of Rocksmith is a perfect example of this!

Got any questions or personal experiences with Rocksmith? Let’s talk about it in the comments below!

Posted on December 1, 2011 by Donnie Schexnayder in Finding New Students